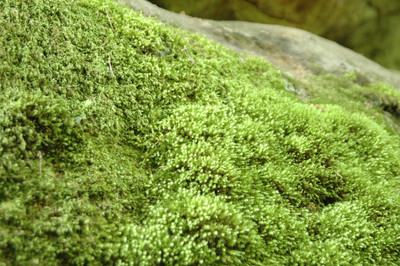 Carpet moss, Hypnum, 5 Square feet, as its name suggests, is an evergreen plant that carpets the ground. It darkens in color from a golden tone to a forest green hue as it ages. It is almost like nature's velvet carpet, due to short growth length and velvety-looking texture.

Moss does not have actual roots, stems, or leaves like other plants. Also, unlike most other plants, it does not use seeds to reproduce. Instead, it uses a spore-plant, better known as a sporophyte, a stem-like structure with spore capsules on top. As conditions dry up, the capsules containing the spores open up and deposit. Moss does both sexual (male and female) and asexual reproduction, meaning it can adjust to the conditions to survive. Typically, it doesn't need help to reproduce once it's introduced into a particular area. Carpet moss would prefer a damp, cool environment to grow in, although it can adjust to various temperatures and levels of dryness.

It thrives much better in partial or complete shade than it does in direct sunlight. Generally speaking, moss must have water to survive. The plant has pores that remain open always to receive any moisture. Therefore, the wetter the environment, the better it will look, and the longer it will live.
This plant grows best in the sun, but without proper watering and sun, it will die. With too much sun, it will turn a brown color and fade away. Without sufficient sunlight, the growth will stop. It prefers to grow in North America. The increase will grow out instead of upright. It can grow along rock walls, along edges, and out of cracks in the pavement. This moss is often classified as a ground cover instead of a moss due to its growing ability. For adequate coverage, plant two inches apart. It is a rapid grower. If the area that this moss is planted in gets moisture and shade, one will have no problem growing this moss.

This moss has no flowers and needs very little dirt to grow. This moss is often found growing under trees. Pruning is not necessary, but if the moss starts looking rough, one can trim it to a more uniform look.

5
I purchased carpet moss to put in between stones on a path that leads to a small pond. The moss arrived in perfect condition and ready to plant. It was in small sections that fit perfectly. I'll definitely order from Perennial Nursery again. Gail
3
I ordered 25 sq ft of carpet moss. The box I received had very small clumps of moss–half of it was more like a mulch. Additionally the amount that arrived was less than 5 sq ft. When I called to express my disappoint the woman I spoke with, who honestly couldn't have been nicer, had another box shipped immediately. That box was much, much better– lots of nice large clumps. In the end the moss was exceptional, my only disappointment is that it simply wasn't 25 sq ft like I originally ordered. It was half that. Kathy
5
This Carpet Moss is the healthiest I have ever seen. Very well pleased with the quality of it. Unknown