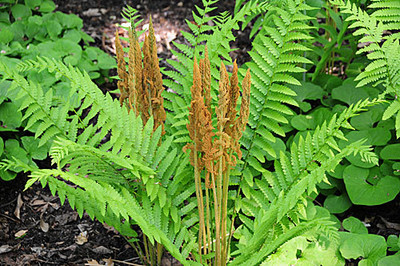 The Cinnamon Fern, Osmundastrum cinnamomeum, is a reasonably common fern that can be found border of North America. The Cinnamon Fern is not an evergreen fern, so that it will die down over the winter months. But it will come right back in the spring, just as gorgeous as it was in the previous years. This fern is just simply beautiful, many of the fronds grow tall and healthy, and then they quickly develop into the vibrant cinnamon color for which the plants named. The Cinnamon Fern can be found growing in dense clumps within moist wooded areas, and this includes marshes and other areas where water tends to collect and stand.

The Cinnamon Fern would make a great addition to any garden. They can grow to be upwards of two to 5 feet tall and around 2 to 3 feet wide. The Cinnamon Fern has two different types of fronds, they have the main one that grows big and wide and the smaller ones that start brightly green in color, and then they eventually wilt away and turn into the distinctive cinnamon color. The Cinnamon Fern is flexible to the locations it can grow, they do enjoy the moist well-drained soils around streams, but they are slightly flexible. They do not need direct sunlight; they are best when they are placed in partial to fully shaded areas.

When planting Cinnamon Fern roots, dig a hole that will allow the entire root to sit in the hole without bending. Place the root into the hole, then cover with soil until the stem of the plant is even with the soil line. Cinnamon Ferns work best planted about one or two inches deep and around 18 inches apart.

The Cinnamon fern is a bareroot rhizome at time of shipment.