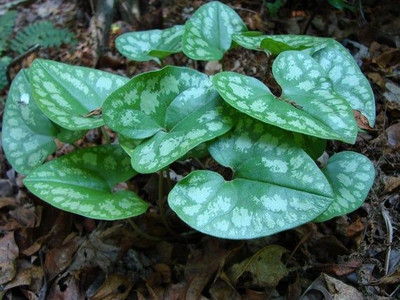 Heartleaf ginger is the common name scientists usually refer to as Hexastylis Arifolia. It is also known by other names like a little brown jug or even wild ginger. It is always green, and it is considered to be a ground cover crop. It is typically found in areas that are shady, moist, and sometimes in forests that are near water. Recognize this plant lookout for heart-shaped leaves that usually are a beautiful shade of green.

They become easy to find during winter because they are usually green while everything has changed to brownish. During cold winter, the heartleaf can change color to either brown or grey because of frostbite. When the weather turns, it will return to its standard green color. It is commonly referred to as more extensive than any conventional cover crop measuring 3 inches to 8 inches. Although they usually have a height of 4 inches from the ground.

A slightly curved purple petiole typically supports this plant. Its leaves are usually covered with blemishes that look cream in color. It usually blossoms during the early spring season. Its flower has a unique shape like a jug; hence its other name is the little brown jug. They typically differ depending on the amount of sunlight they receive. They can be greenish pinkish whitish or even purplish. When they mature, they get their final color which is brown or maroon.

The flowers of the heartleaf ginger usually bloom in the spring, which leads to blooming under its leaves.

This could lead some people to believe it doesn't have a flower because it is usually hidden under the leaves. The flowers commonly are spread out; they feel leathery to the touch and are generally thick. The mouth of the flower is usually full of three triangular-shaped lobes. It is also called wild ginger because most of its parts generally smell like ginger. Other people say it has the same scent as licorice. The smell has been reported to repel insects.

This plant commonly can be found in areas where the soil is moist fertile and well-drained. Mostly in flat forests, ravine slopes, and occasionally near streams, lakes, and even ponds. You should consider this if you want to grow it. In the right condition, it can produce large leaves. In a less favorable situation, it creates a fewer number of leaves, usually one or two. It grows slowly compared to other wildflowers.

The heartleaf ginger give green to your garden all year long.

It is commonly observed to grow near another wildflower called trillium, which is another ground cover plant. It is also an excellent choice to grow in your wildflower garden. You can find it naturally around forest floors or buy it from other people's nurseries. It is also an excellent choice to transplant it from the woods to your garden. However, you should make sure it remains moist till it recovers. It is common in states like Florida, Virginia, Northern Kentucky, and the Mississippi. The heartleaf is widespread, with over 65 species found in the continent of Asia and 15 in North America. So, it is better to refer to it as heartleaf and as little jug for exact identification.